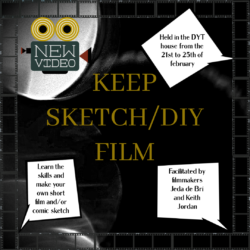 In lieu of our residential we will be holding a week long ‘DIY Film’ project during the February mid-term break. During this week long project you will work with two filmmakers Keith Jordan and Jeda de Brí who will guide you through the process of creating a short film, from conception to post production. As well as learning the ropes on professional film equipment, this course will also have a focus on filmmaking using your own devices-sometimes the simpler the better!

Collaborate alongside other members to create your very own short film/ comic sketch!

During the week there will also be two evenings of social activity to be revealed!

*Members who sign up must be able to commit to the full week of activity (unless otherwise cleared with Sarah or Phoebe!)*

Keith Jordan is a writer, director, and editor who has worked across multiple disciplines, in front of and behind the camera. He received his BA in Film & TV production at Teeside University, UK.

He is the creator of the online comedy channel ThisContent which has received multiple awards for their original Web Series, Jill and Lill (Best Sketch & Best Actor at Firehouse Film Festival 2019, Best Web Series & Best Editing at Dublin International Comedy Film Festival 2020). Every episode of Jill and Lill was written, directed, shot, and edited by Keith.

His work as an editor includes the short films Two Oh Five and The Wake (Dir. Megan K. Fox) as well as the upcoming short, Amy on the Balcony (Dir. Jeda de Brí).

Keith graduated from Bow Street Academy for Screen Acting in 2017 and has appeared as an actor in the Netflix adaptation of George R. R. Martin’s Nightflyers, Ciara Elizabeth Smyth’s award-winning play All Honey, as well as the short film, Grave Girl, 2021 (Dir. Gwynne McElveen) which debuted at last year’s Waterford Film Festival.

He is currently developing Jill and Lill as a feature film with Samson Films.